SOUTH BEND — This is Jasmine Bradley’s time of the year. 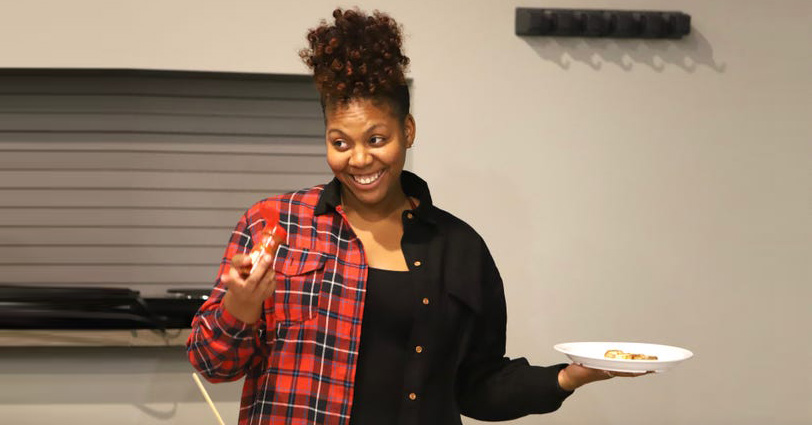 Bradley, 25, likes to cook, and with Christmas among the holidays left on the 2021 calendar, she will be spending much of her time in the kitchen. It’s been that way since she was a little girl observing her mother and grandmother in the kitchen preparing holiday staples such as turkey, dressing, collard greens, and macaroni and cheese.

“My grandmother and my mother, they are the biggest cooks in the family, and even as a kid, I was in the kitchen,” she said. “I wanted to know how did you make something. It smelled so good.”

Bradley said that she wanted to watch, and then she wanted to help — even if that meant nothing more than making a cake from a mix. She wanted to be around the food, and also the sisterhood that developed among the women who made the food.

As her confidence grew, Bradley believed that she could make any dish better. That was definitely the case when she lived in the dorms while attending college at Bethel University.

“I was always in my dorm cooking and I would have dinners for my roommates and friends and stuff like that,” she said.

Bradley said she’s always looking to expand the culinary options for her friends and family, and that is why she is taking the challenge of exposing them to vegan alternatives to the soul food dishes found on tables of Black families during the holidays and throughout the year.

Bradley said there are deeply personal reasons for her to provide vegan options to the dishes that she grew up eating.

South Bend:Women entrepreneurs, even a 4-year-old, show their skills at launch event

“I have been vegan for four years now, and what caused me to become vegan was doing a lot of research on what is best for our bodies,” she said. “And being Black and knowing that a lot of the diseases we have are connected to what we eat and how we eat and our lifestyles.

“Having diabetes in our family and my grandfather passing away from cancer and different things made me want to take care of my body, and vegetables have all the things I need to get the nutrients and things like that. And that is what kind of started me on the journey to become vegan.”

Bradley said that she spent much of that four years doing research on how to get the nutrients and proteins that she needed while on a vegan diet. She also spent a great deal of time researching and experimenting how to make tasty vegan alternatives to the food that she and her relatives grew up enjoying. She knew that the foods had to taste good and be seasoned in a way that would make the dishes an acceptable alternative to the non-vegan foods they replaced.

For the past few months, she’s been working as a vegan lifestyle coach, helping people learn how to incorporate healthy food into their diets. And she participated in Michiana Veg Fest, an annual event that takes place in April to educate people about eating a plant-based diet.

Karen Sommers, who is chairman of the board of Michiana Veg Fest, said that inviting people like Bradley to conduct cooking demonstrations helps to fulfill their goal of educating people about the benefits of eating a plant-based diet.

“One of our board members knew Jasmine and we reached out to her and asked if we could work with her to provide some sampling of food and showing participants how to prepare vegan food,” Sommers said.

Sommers said the organization was aware that Bradley often posts videos showing her preparing vegan dishes, including vegan alternatives to soul food staples. Reaching out to people from diverse communities is also a big part of the group’s mission, Sommers added.

“Our goal is to reach people at all levels and all cultures …” she said.

Bradley is starting her own meal preparation and catering business, Vegan Bites by Jas. It’ll launch fully in January, she said.

Bradley said that people want the flavors they find in the foods that they grew up with and grew to love, and that she has been able to find alternatives that capture those flavors.

Take collard greens. She said that cooks add meat and neck bones to them to add flavor.

“I start off my collard greens with a vegetable broth and then I season it with garlic, onions, different peppers and things like that,” she said. Bradley then spices the dish up by adding hot sauce. She then lets the greens soak in all of those spices.

Macaroni and cheese is a staple in most, but apparently not all, households. Being a vegan, Bradley doesn’t use dairy products, swapping the milk and cheese with almond milk and cashews.

Bradley said that she started bringing her vegan dishes to family dinners about three years ago, and it was not an easy sell. People were resistant.

“They were just like, ‘I don’t know. I will just take a piece and put on my plate.’ And all of it was gone by the end of the day,” she said.

Bradley said part of her success comes from the fact that she is not trying to force people to totally forsake meat or cheese. She does want people to include more vegetables in their diet, and the best way to do that is to show that vegan meals can be a tasty alternative.

It’s worked, she said. Bradley’s mother has adopted a pescatarian diet and her younger sisters eat a vegan diet whenever they stay with her.